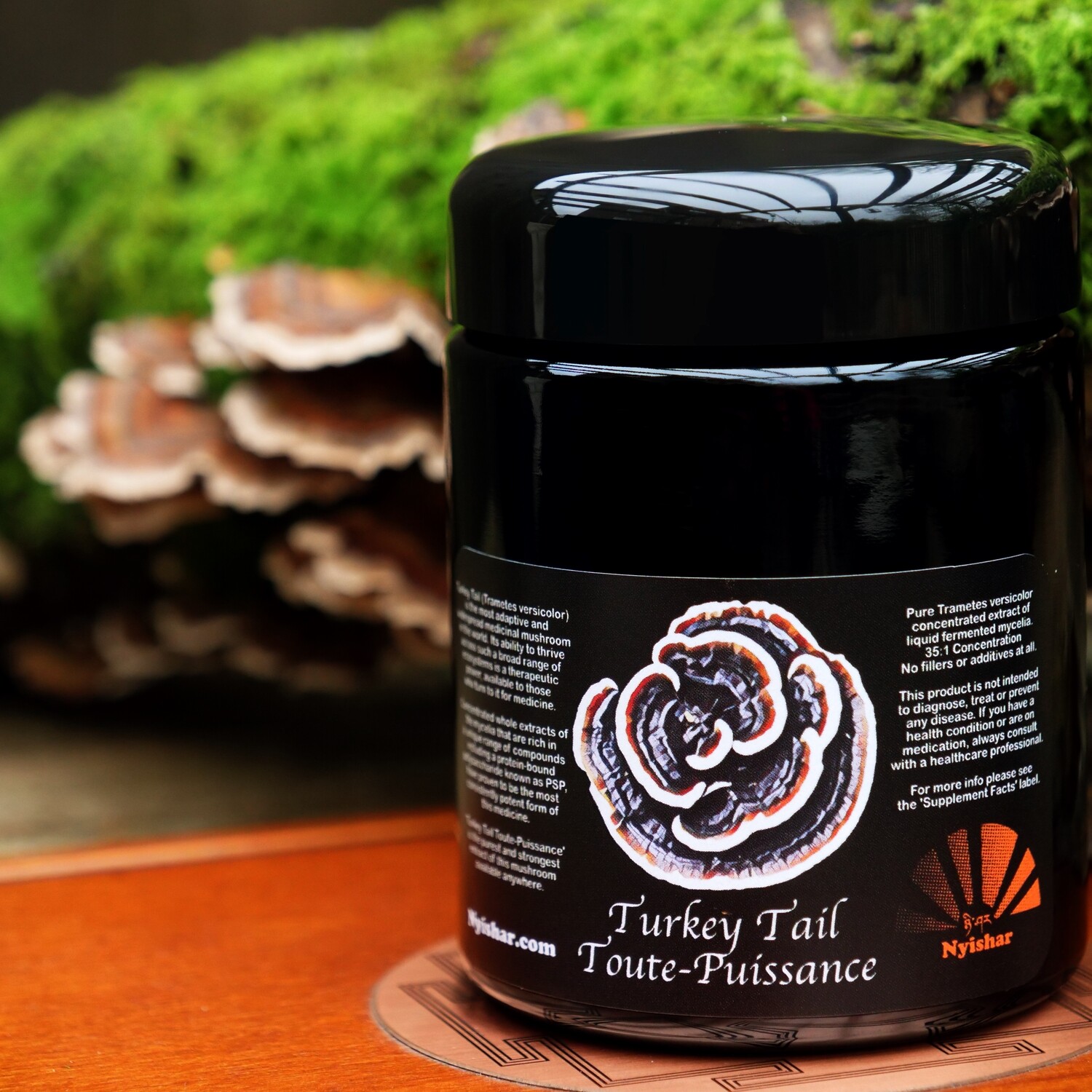 Introducing 'Turkey Tail Toute-Puissance' - the name simply means 'all-powerful' or 'maximum potency', because that is precisely what this product delivers. It is a concentrated extract, produced from the fermented mycelium of the Cov-1 strain specifically - because this strain is rich in the broadest selection of bioactive compounds, most notably a protein-bound polysaccharide known as PSP. Previously a constituent called 'PSK' was understood to be the primary active compound in Turkey Tail, but since the discovery of PSP in the 1980's, it has proven to be far more potent with a much more impressive array of potential health benefits than PSK.

PSP is exclusively found in the Cov-1 strain of mycelium, which is liquid fermented with no solid substrate or additives whatsoever. It is then hot water extracted in a pressurised container, before undergoing alcohol precipitation and finally being spray freeze dried, drying the extract into a very fine-grade powder. It is then encapsulated into vegan hypro-mellose capsules for ease of use and measured dosage. Each capsule contains 350mg of maximum potency, bioavailable, fully extracted Turkey Tail.

Turkey Tail is the most rigorously studied and scientifically evaluated medicinal mushroom in the world, and boasts thousands of years of recorded clinical use in traditional Asian medicine systems. Isolated extracts from Turkey Tail (such as PSK and PSP) have been registered drugs in a number of countries such as Japan, China and Russia, as immuno-therapeutics and adjuvant medicines in certain cancer treatment protocols. PSP has also been used as an antiviral drug in the treatment of HIV.

Traditionally Turkey Tail was used as a liver tonic and as a powerful immune-enhancer and remedy for various types of infection. It was considered to be a tonic for the entire body, regulating a number of metabolic systems and increasing overall vitality. The majority of the research concerning Turkey Tail has focused on its ability to modulate and augment the immune system. Turkey Tail has a stabilising effect on immune function - it can increase activity of white blood cells - such as macrophages and cytokines - or decrease activity depending on what the body needs. This means that it does not work in exactly the same way for everyone, as different people require different intervention and support. This is why Turkey Tail is understood to be an adaptogen - a medicinal organism that can bring the body into a dynamic state of balance - a state of homeostasis.

Turkey Tail promotes Superoxide Dismutase within the body - an antioxidant enzyme that neutralises free radicals and has a regulatory effect on inflammation, while its immune support can often help to eliminate the cause of the inflammation.

Turkey Tail is truly a supreme tonic medicine that has thousands of years of documented use in Asia and many decades of scientific investigation to support its use as a superior protector of health.

Nyishar products and the claims made about them on or through this site have not been evaluated by the MHRA or United States Food and Drug Administration and are not intended to diagnose, treat, cure or prevent disease. The information provided on this site is for informational purposes only and is not intended as a substitute for advice from your doctor/physician or other health care professional or any information contained on or in any product label or packaging. You should not use the information on this site for diagnosis or treatment of any health problem or as a substitute for medication or other treatment prescribed by your doctor/physician or health care provider.

Save this product for later